This web page is still being constructed

Magnetic resonance (MR) imaging (MRI) is widely used to image the brain. Often times though after the use of an image analysis algorithm the image quality can deteriorate if the image is not acquired according to optimal protocol. There are many practical reasons to disregard protocol such as when making a rapid emergency scan or multi-institutional trials, but it often results with images that are of not the desired tissue contrast or intensity. This paper proposes an image restoration technique called MR image example-based contrast synthesis (MIMECS). The central idea behind MIMECS is to synthesize MR contrasts using patches (small regions of the image). The core idea of MIMECS is that each subject patch can be matched to a combination of a few relevant patches from a dictionary in a nonlocal fashion [43], [45], [46]. It is different from classical histogram matching in the sense that a patch can be thought of as a feature vector of its center voxel, thus including local neighborhood information for that voxel. There are several advantages of MIMECS compared to previous synthesis methods. First, it is a completely automatic preprocessing step that can precede any image processing task. Second, there is no need to use multiple, calibrated pulse sequences in order to estimate underlying tissue parameters. Third, even though MIMECS uses an atlas, there is no need to carry out subject-to-atlas registration, thus avoiding potential errors due to misregistration or missing tissues. Finally, it does not require any segmentation of the subject. 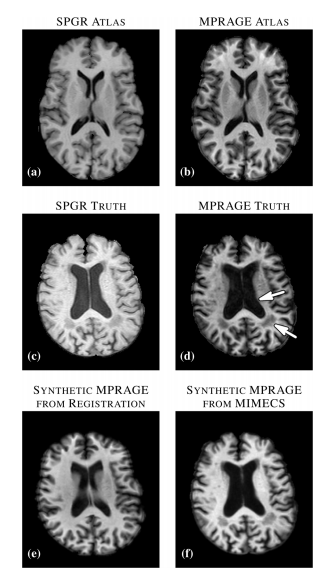 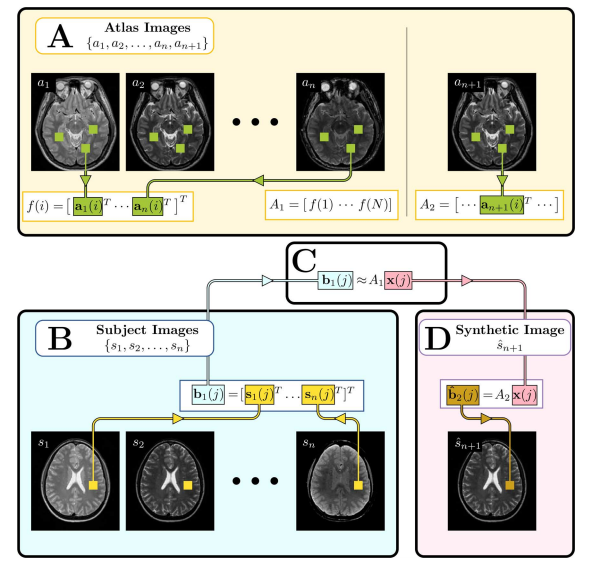 The most important results from the set of experiments can be summarized as follows. First, we found that features an nose that are present in the subject image but not in the atlas image (defined in the paper) are suppressed to some degree in the reconstruction. This was true in both recovering the same tissue contrast and in recovering different tissue contrast. This suggests that MIMECS can be used for noise suppression and also shows that MIMECS atlas should contain a patch dictionary that is rich enough to encompass the patches that are expected to be found in the source image. Second, the experiments confirmed that sparsity is important when reconstructing patches with significant detail because otherwise the detail will be smoothed out. Third, MIMECS is robust to the specifics of the subject pulse sequence. In paticular, we found that an atlas comprising both an SPGR and MPRAGE can be used to synthesize either an MPRAGE or SPGR image even if the subject image did not precisely match the SPGR or MPRAGE pulse sequence parameters of the atlas. Fourth, we found that MIMECS normalization is comparable or better than histogram matching when normalizing the same tissue contrast and is far more general in that it can recover missing contrasts. Finally, we found we found that errors in MIMECS synthesis do not take on specific anatomical features, but instead resemble a typical noise pattern of MR images.

The authors would like to thank A. Jog for his help in coding the K-d tree and to D.L. Pham for his insightful comments about this manuscript during its preparation. The authors would also like to thank the BLSA participants and neuroimaging staff for their dedication to these studies. Some data used for this study were downloaded from the Biomedical Informatics Research Network (BIRN) Data Repository, supported by grants to the BIRN Coordinating Center (U24-RR019701) Function BIRN (U24-RR021992, Morphometry BIRN (U24-RR021382), and Mouse BIRN (U24-RR021760) Testbeds, funded by the National Center for Research Resources at the National Institutes of Health, USA