Oral cancer may not have a high mortality rate, but the morbidity in terms of speech, mastication, and swallowing problems is significant and seriously affects the quality of life of the cancer patients. Characterizing the relationship between structure and function in the tongue is becoming a core requirement for both clinical diagnosis and scientific studies in the tongue/speech research community. A key to pursuing our goals is the ability to acquire a single high resolution 3D structural image of the tongue and vocal tract. A major problem with achieving a high resolution 3D structural image is time. A proper acquisition would take at least four to five minutes and after two to three minutes the tongue would start to involuntarily move, so therefore current protocol is to take three orthogonal volumes with axial sagittal and coronal orientations. But current protocol leads to no ideal image stack for 3D volumetric analyses. In particular, since each volume has poorer resolution in the slice-selection direction than in the in-plane direction, it is difficult to observe tongue muscles clearly in any one of the volumes. Therefore, reconstruction of a single high-resolution volumetric tongue MR image from the available orthogonal image stacks will improve our ability to visualize and analyze the tongue in living subjects. 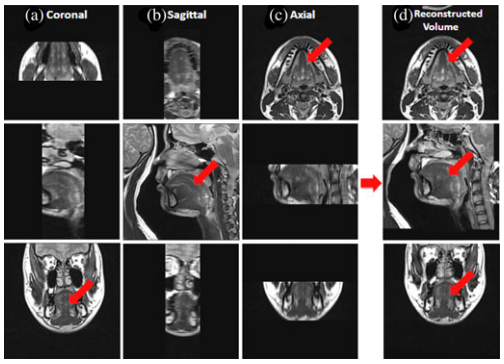 In this study we develop a fully automated and accurate superresolution volume reconstruction method from three orthogonal image stacks of the same subject by extending our preliminary approach. We present a refined preprocessing and reconstruction algorithm design and provide validations on both tongue and brain data. We use a number of preprocessing steps including motion correction, intensity normalization, etc., followed by a region based maximum a posteriori (MAP) Markov random field (MRF) approach. The region based approach allows us to reconstruct the tongue at high resolution, because it resides in the intersection of the image FOVs, as well as other regions around the tongue which are used in the analysis of speech production. In order to preserve important anatomical features such as subtle boundaries of muscle, we use edge preserving regularization. To our knowledge, this is the first attempt at superresolution reconstruction applied to in vivo tongue high-resolution MR images for both normal and diseased subjects. The resulting superresolution volume improves both the signal-to-noise ratio (SNR) and resolution over the source images, thereby approximating an original high-resolution volume whose acquisition would have taken too long for the subject to refrain from swallowing (or making other motions).

In the preprocessing procedure we go through five steps prior to the reconstruction of the superresolution volume. First is a generation of an isotropic volume followed by conversion of the orientation of each volume to the orientation of the target reference volume. Then, padding of zero values to yield the same volume sizes and afterwords registration to correct subject morion between volumes. Finally, matching of the intensities in the overlap region using spline regression is done.

2. For each pixel s on the volume do

according to the over-relaxation scheme in Eq. 2 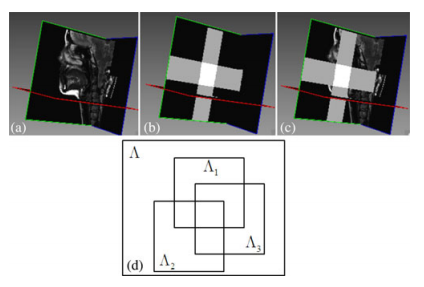 In order to gather our tongue data in this study, fifteen high-resolution MR datasets were used. They came from twelve normal speakers and three patients who had tongue cancer surgically resected. The FOV was 240mm x 240mm with a resolution of 256x256. The proposed method was first evaluated using fifteen simulated datasets. In order to quantitatively evaluate the performance of the proposed method in terms of accuracy of the reconstruction, the final superresolution volume using the proposed method was considered as our ground truth data. The ground truth was constructed with 256x256x256 voxels with a resolution of 0.94mm x 0.94mm x 0.94mm. In what follows, volume reconstruction was carried out in four ways. first, fifth-order B-spline interpolation was performed in each plane independently. Second, averaging of three up-sampled volumes was performed. Third, reconstruction from three up-sampled volumes using Tokhonov regularization was performed. Finally, the proposed method using three upsampled volumes was carried out.

Brain Data was also collected. Three isotropic high-resolution brain MR datasets were used to objectively evaluate and compare the performance of different reconstruction methods. For each subject, two magnetization prepared rapid gradient echo (MPRAGE) images were obtained. One challenge in the proposed method is a lack of ground truth available in in vivo volumetric tongue MR data. In order to avoid potential bias in our experiments, we used two high-resolution brain datasets with isotropic resolution to evaluate the performance of different reconstruction methods.

In this study, a superresolution reconstruction technique based on the region based MAP-MRF with an edge-preserving regularization and half quadratic approach was developed for volumetric tongue MR images acquired from three orthogonal acquisitions. Experimental results show that the proposed method has superior performance to the interpolation-based method, simple averaging, and Tikhonov regularization. It It also better preserved the anatomical details as quantitatively confirmed. The proposed method allows full 3-D high resolution volumetric data, thereby potentially improving further image/motion and visual analyses.

The authors would like to thank S. Ying, Department of Radiology, Johns Hopkins University, for sharing brain data in their simulation. They would also like to thank the reviewers for their helpful comments