Before advances in cardiovascular magnetic resonance (CMR) methods allowed for three-dimensional (3D) interrogation of myocardial strain, one-dimensional (1D) and two dimensional (2D) strain analysis was the standard. The aim of this study was to investigate the incremental value of CMR-based 3D strain and to test the hypothesis that 3D strain is superior to 1D or 2D strain analysis in the assessment of viability using a porcine model of infarction.

All animal studies complied with the Institutional Animal Care and Use Committee and conformed to Guide for the Care and Use of Laboratory Animals.

MI was induced in twenty young farm pigs with weights from twenty five to thirty five kilograms. An Angioplasty balloon was inserted into the left anterior descending coronary artery (LAD) and inflated to a location just distal to the second diagonal branch of the LAD. After One hundred and fifty minutes, the occlusion of the artery was terminated. All surviving animals progressed to heart failure and were monitored daily.

Images then were acquired at 11±6 days (baseline) pre-MI, and at 11±4 days (early) and 34±8 days (late) post-MI. In all animals, Cine, LGE (late gadolinium enhancement), and CMR tagging images (zHARP images) were all acquired. Harmonic phase analysis was performed to measure circumferential, longitudinal, and radial strains in myocardial segments, which were defined based on the transmurality of delayed enhancement. Univariate, bivariate, and multivariate logistic regression models of strain parameters were created and analyzed to compare the overall diagnostic accuracy of 3D strain analysis with 1D and 2D analyses in identifying the infarct and its adjacent regions from healthy myocardium.

Cine and LGE images were analyzed using QMass and MR software. LV epicardial and endocardial borders, excluding papillary muscles, were traced in end-diastolic and end-systolic cine short-axis images to measure global function. The semi-automated full-width-at-half-maximum method was employed to identify the infarct zone on LGE images. The cine and LGE images were analyzed prior to the strain analysis in a blinded manner. For each zHARP slice, the closest LGE slice was identified and mapped to its corresponding mid-diastolic zHARP image using an affine registration. 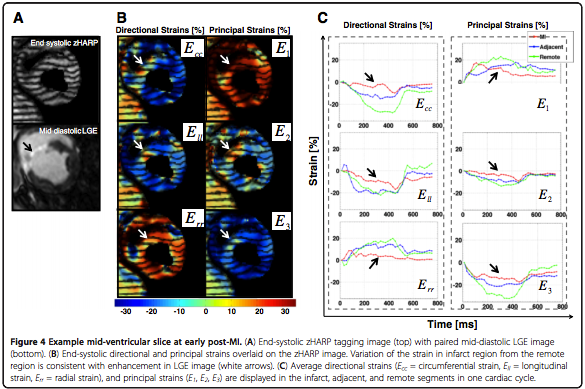 Figure 4A shows an example of an end-systolic zHARP image and its corresponding mid-diastolic LGE image in one animal at early post-MI. Directional and principal strains overlaid on the zHARP image and their temporal profile are shown in Figure 4B and 4C, respectively. Reduced magnitudes were observed in all strain indices in infarct segments versus adjacent and remote segments (Figure 4C, black arrows).

We thank Evert-Jan Vonken, MD, PhD, and Michael Schär, PhD for kindly providing the technical expertise with CMR acquisitions, and Amr Youssef, MD for help with animal studies. This work was supported in part by NIH/NHLBI research grant R01HL47405.