To open the look-up table (LUT)/Transfer function window, press the button located on the image toolbar in MIPAV

. If this is not visible, use Toolbars > Image Toolbar to open it. The new window should resemble the image in Figure 1. Also shown below in Figure 2 is an image corresponding to the LUT shown.

To increase the contrast, making the cerebellar structures more easily appreciated, modify the yellow line to resemble the one shown below. Note the improved contrast in the corresponding image.

The LUT is a histogram of the pixel intensities.

This button does something similar:

just click and drag. You can always readjust using the LUT.

When adjusting the LUT try several different settings to be sure you pick the best, but also try to be consistent. We want our ratings to be as accurate as possible so try to set the LUT in the same manner for every image.

To find the intensity values that most closely match the pixels at the CSF (cerebral spinal fluid) -cerebellum boundary, first select the pointer cursor

. Then, find the intensity at a pixel you would like to include as part of the delineation by clicking with the pointer. Next, find the intensity at a pixel that you would like to exclude from the delineation. Determine the average of those two intensities and make that your threshold value. See example below. It is a good idea to set several thresholds and test each in several areas of the scan and with several different levels of contrast. Do this to be sure you make the right choice and to help you be consistent with your choices.

In this example, we start with a threshold of 200,000. Next, open powerpaint tools with the button

. This will open a window resembling the figure below. Type in the appropriate threshold in the field indicated by the red border and check the threshold option as shown. 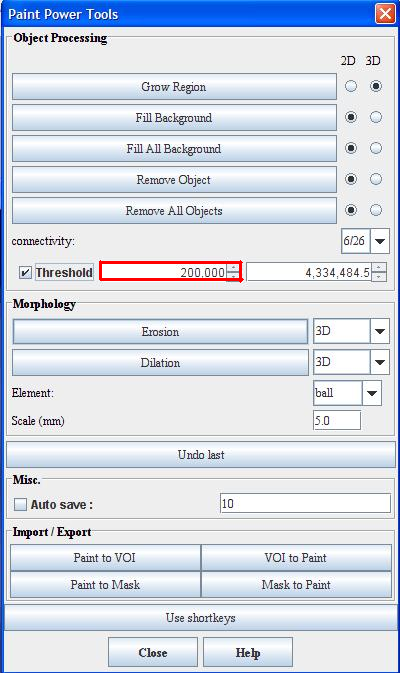 Painting With the Threshold

Select the paintbrush and paint in the cerebellum. Left click to paint right click to erase. You will notice that pixels with intensities below your threshold will not be painted. It is important to remember that the first stroke painted will not register the threshold. If it is still not working, try clicking the up and down arrows next to the threshold box, then try again. Use a large paintbrush (e.g. 8x8 or 10x10). The figure below shows the painted area before and after thresholding. You need to test/adjust the threshold value for a couple slides to find the "best" number. A lower threshold is preferable to reduce “holes” in the painted region and to ensure that all cerebellar gray matter is included.

Note: The threshold is a little temperamental; it may or may not change immediately. Try multiple different settings.

It is also possible to paint using the threshold in the tri-planar window. This is a series of steps that I have taken that has worked in the past and may or may not work in the version of MIPAV you are using. Open the MRI scan first. Then load the advanced paint tools. Now open the Tri-planar view. Next load the power paint tools. Enter your threshold and check the box. Test it at least twice in the original image and then, if it works, try it in the tri-planar. If it doesn't work check and uncheck it again and test it twice more in the original and once in the tri-planar. 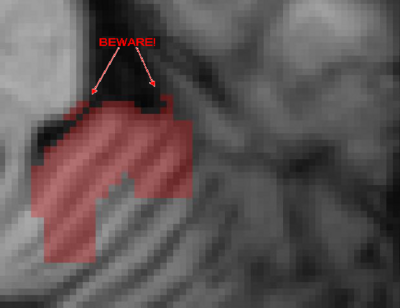 It is now that extra care should be taken to ensure that the Cerebellum-Brainstem boundary is correctly painted. Use a smaller brush for this (4x4 or 3x3 recommended). Open the tri-planar view

These are the steps to accurately draw the Cerebellum-Brainstem boundary:

After completing the above, it is recommended to review the entire cerebellum in the sagittal view. Most likely, there will be many artifacts present in the delineation, especially stray unpainted pixels (“holes”). These must be manually corrected. You should revise the Cerebellum/CSF boundary where appropriate. HINT: To keep using the threshold in this view, one must return to the primary axial view and click anywhere on the outside of the brain. This will apply the threshold retroactively to all the slides.