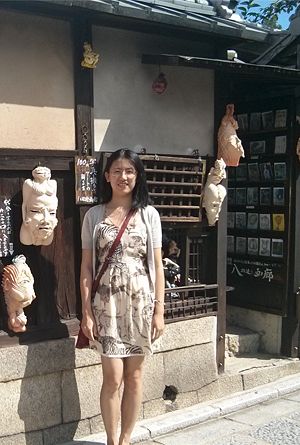 I'm a former PhD student in the Image Analysis and Communications Lab (IACL) at Electrical and Computer Engineering, Johns Hopkins University. My advisor is Dr. Jerry L. Prince. I graduated in 2015 and now I'm a software engineer at Google.

Accurate delineation of sub-regions of the cerebellum, into cerebellar lobules, is needed for studying the region specific decline in function from cerebellar pathology. In this work, we present an automated cerebellar lobule segmentation method using graph cuts, with a region-based term enforcing consistency with multi-atlas labeling results, and a boundary term defined by membership output from a random forest classifier. The automated segmentation method produces a 28 label cerebellar parcellation. It is validated using both healthy subjects and patients with cerebellar disease. 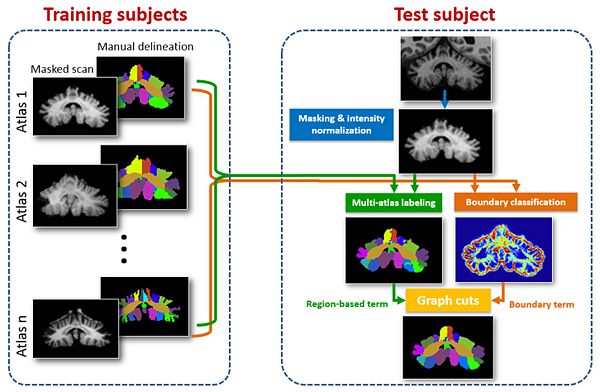 Dimension reduction and feature representation is an important and challenging part in studying the structral-functional relation in medical image analysis. In the past decade, deep learning has gained great attention in various fields for its power in feature learning. Here we try to apply deep learning techniques to predict cerebellar ataxia types and functional scores from MR images. Preliminary result outperforms classification method based on traditional dimension reduction techniques such as PCA.

Different types of cerebellar ataxias are associated with different region-specific patterns of cerebellar atrophy. Studying these atrophy patterns can help predict disease types and stages, and in turn help treatment planning. In this work, we (1) present an automated image processing pipeline to generate a shape descriptor of the cerebellum; (2) use machine learning to predict ataxia types as well as with a cognitive score (Stroop color-word test). Using the shape descriptor as input, we are able to classify the healthy controls and different ataxia types. We also present results on predicting cognitive scores.

Automatic labeling of the gyri and sulci on the cortical surface is important for studying cortical morphology and brain functions within populations. We propose a method to simultaneously label gyral regions and extract sulcal curves. The proposed method labels the subject cortical surface by deformably registering a network of curves that form the boundary of gyral regions to the subject cortical surface. In the registration process, the curves are encouraged to follow the fine details of the sulcal geometry and to observe the shape statistics learned from training data. 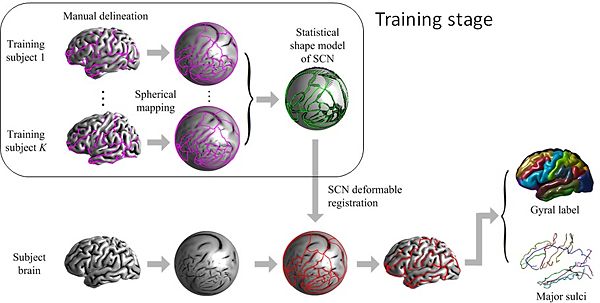 With the rapid development of microscopy for cell imaging, there is a strong and growing demand for image analysis software to quantitatively study cell morphology. Automatic cell segmentation is an important step in image analysis. We propose a fully automatic method for segmenting whole cells in fluorescence images of confluent cell monolayers. This method addresses several challenges through a combination of ideas: 1) It realizes a fully automatic segmentation process by first detecting the cell nuclei as initial seeds and then using a multi-object geometric deformable model (MGDM) for final segmentation. 2) To deal with different defects in the fluorescence images, the cell border is enhanced by applying an order-statistic filter and principal curvature based image operator. 3) The final segmentation using MGDM promotes robust and accurate segmentation results, and guarantees no overlaps and gaps between neighboring cells.